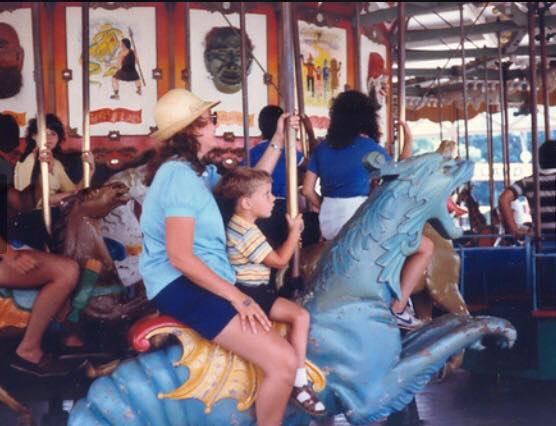 Trying to find documentation about Rocky Point’s midway carousel is like riding it — round and round you go until you end up at the same place you started!

Indeed, the carousel above was called the “Midway Carrousel” – not to be confused with the park’s Waterfront Merry-Go-Round, which is a whole other blog post which I’ll link to at the end of this one. 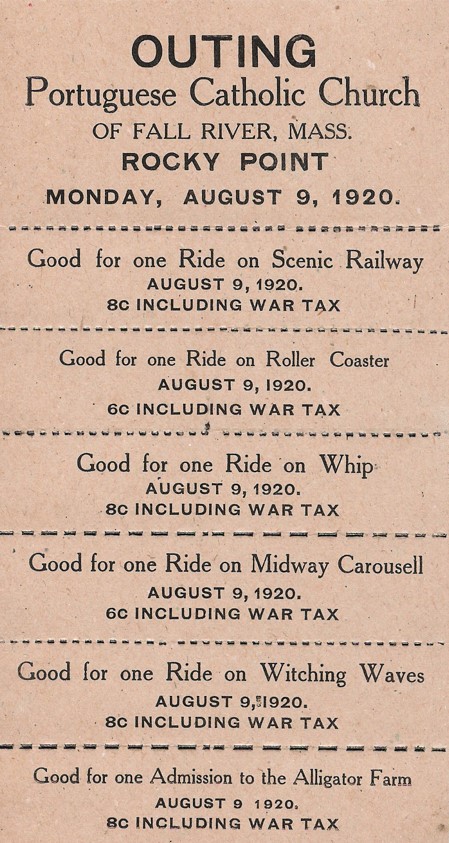 Sadly, there is no documentation one way or another that puts the Hershell-Spillman in the park prior to the 1938 hurricane’s devastation.  We know that there was A carousel on the midway and we know by the photo where it was located; that’s it.  Nor is there any documentation that states that this carousel was obtained from another park for Rocky Point’s 1948 re-opening after a ten-year hiatus.  We do know that the park reopened with A carousel as seen in this 1948 Billboard article.

Then there’s this photo of the carousel building shot a few years after the 1938 hurricane.  Of course, it reveals no indication of what was inside. 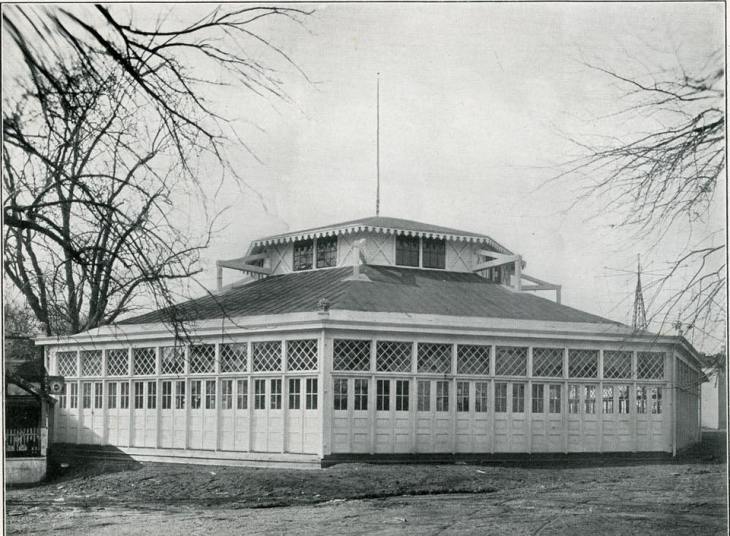 Circled in blue is the carousel in 1957 having received the Jack Ray Art Deco treatment.  Was it a retrofit of the carousel building above, or was it a brand new building for the 1948 season?  Again, a lot of loose ends! 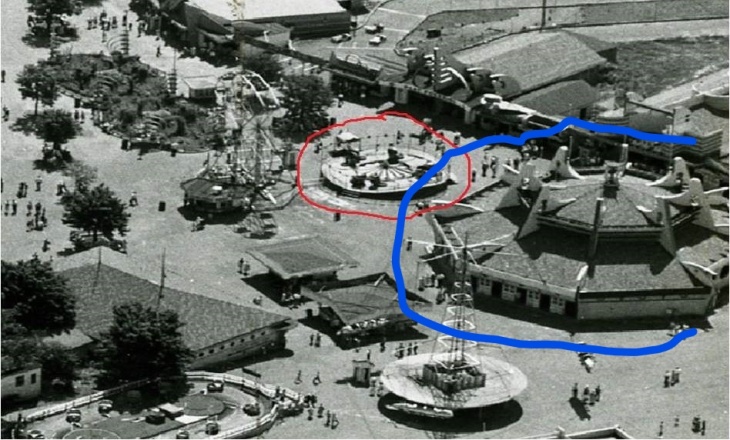 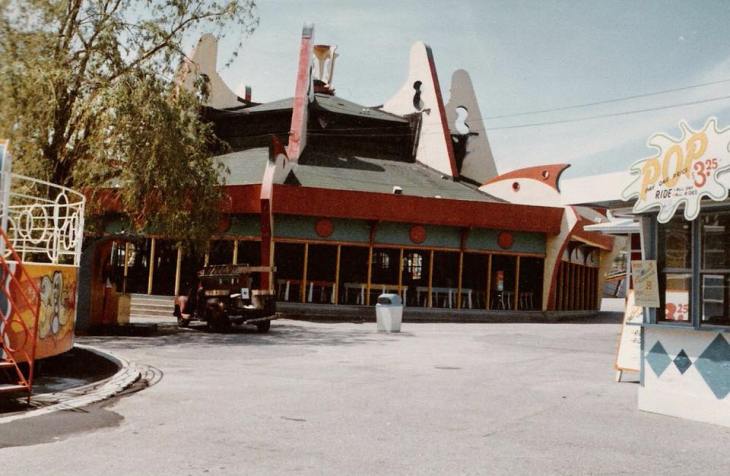 Here’s what we know for sure: the carousel was a three-row, raised platform beauty as evident by these interior photos below. Standers on the outside; two rows of jumpers on the raised platform. 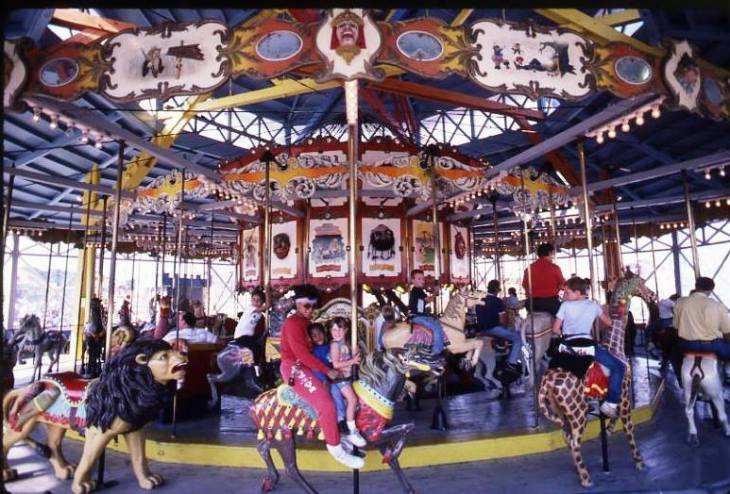 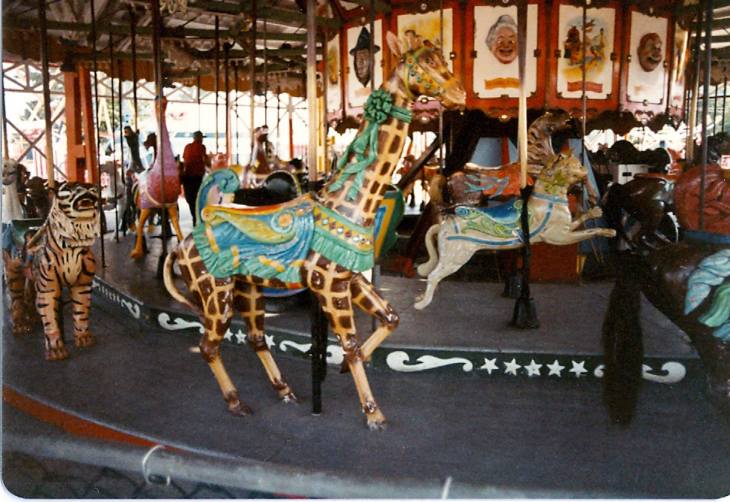 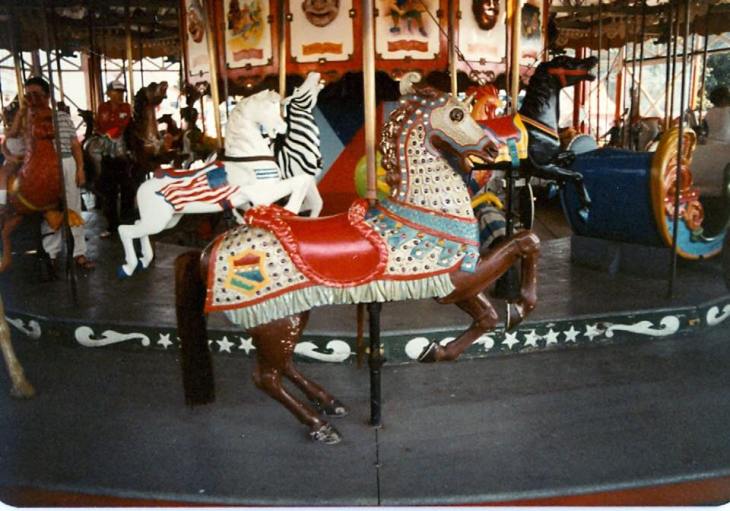 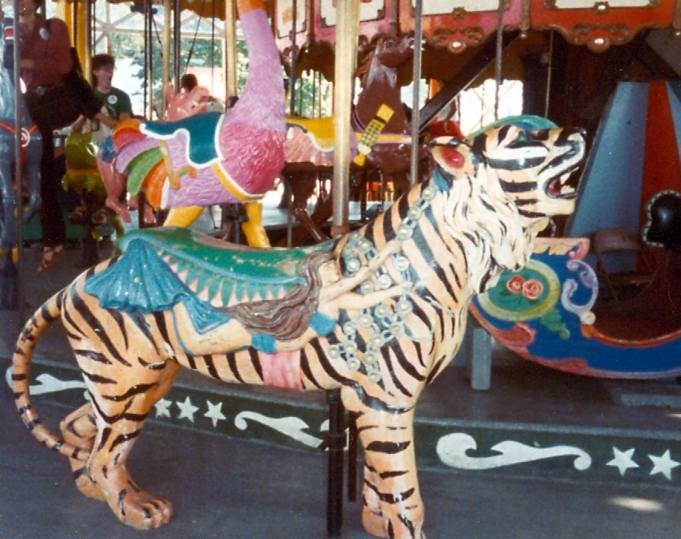 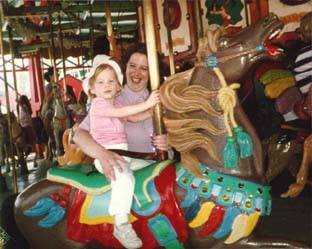 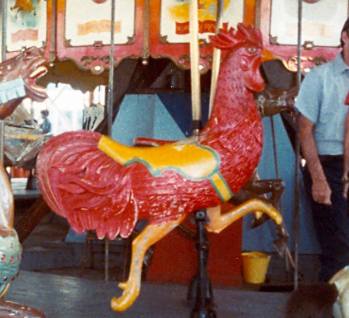 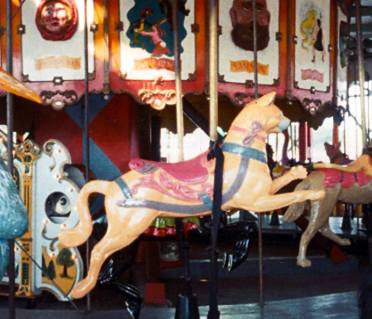 Below is the band organ that played on the Rocky Point’s Herschell-Spillman carousel as seen in the 1970s. It’s a Wurlitzer 125 Brass Trumpet Organ. The 125 was designed mostly to be used in skating rinks, having a harsh, brassy tone. It was later replaced. 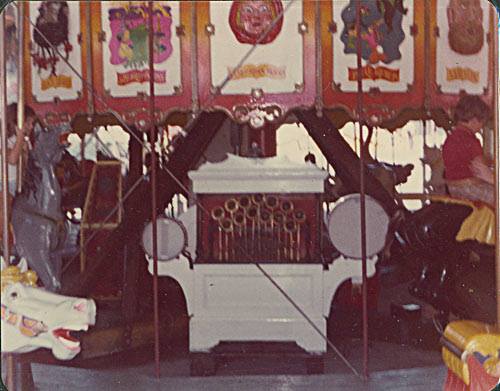 As time passed, much of the Art Deco stylings were removed from the carousel building. 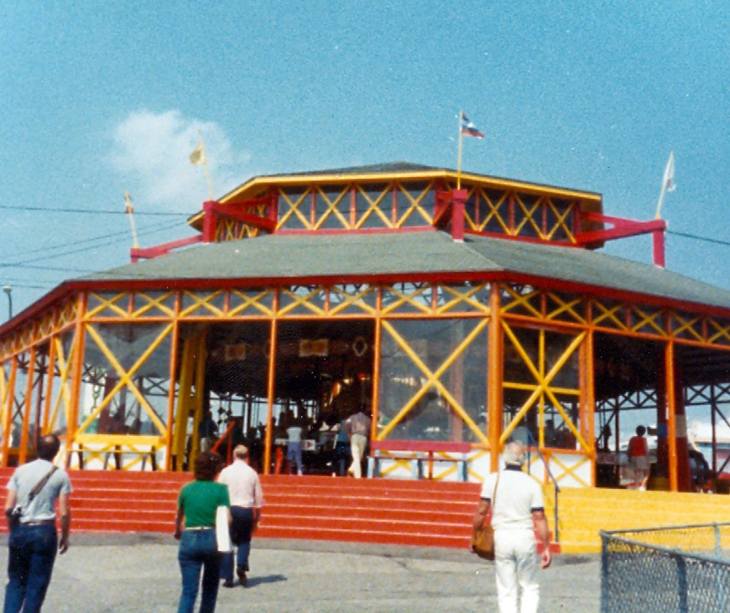 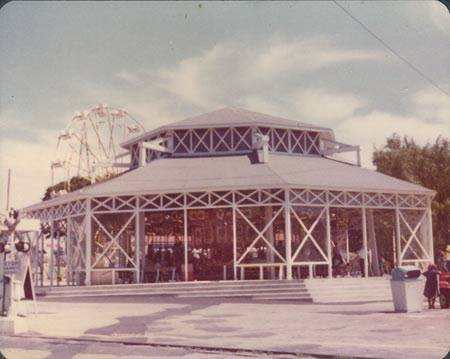 As most of us know, the magnificent menagerie was herded out of Rocky Point in April 1989. 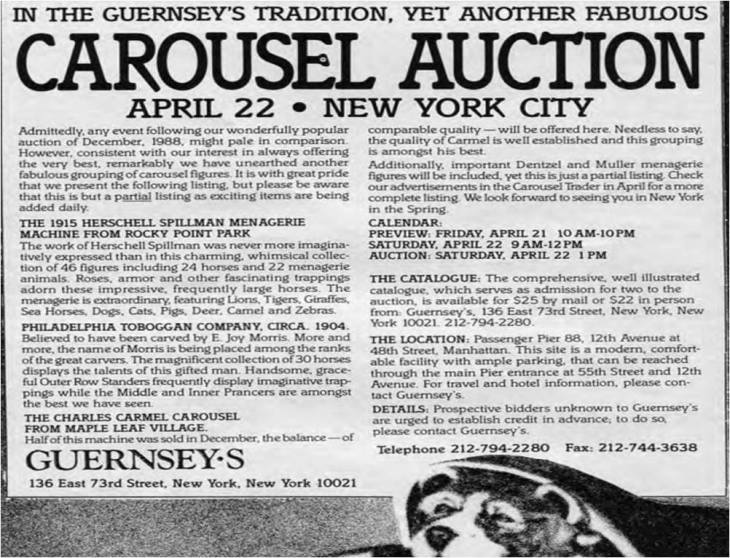 And in a cruel twist of fate, the wooden wonders were replaced by used Allan Herschell Company fabricated horses.  AHC was the company that splinted away from Herschell-Spillman, remember? What goes around, comes around, I guess. 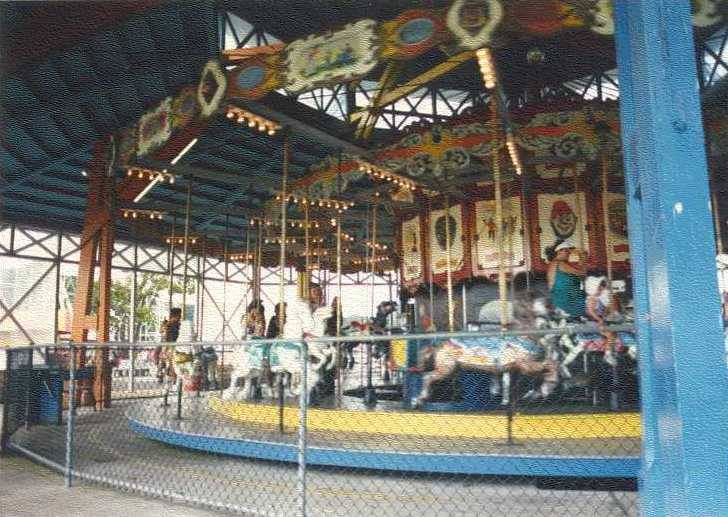 And after 1996, the Midway Carrousel was gone for good; its platform moved to Atlantic Beach at Westerly, RI (Misquamicut Beach)  It replaced the beach’s classic Illions carousel (another carousel mystery right there, as to why).   But there are some big, retained Illions horses aboard Rocky Point’s former two-level Herschell-Spillman platform. Along with the great Illions jumpers, there are some Allan Herschells (surprise, surprise!) and some metal Arrow Development horses aboard to fill in. The Illions dragon chariot is big and beautiful as well. 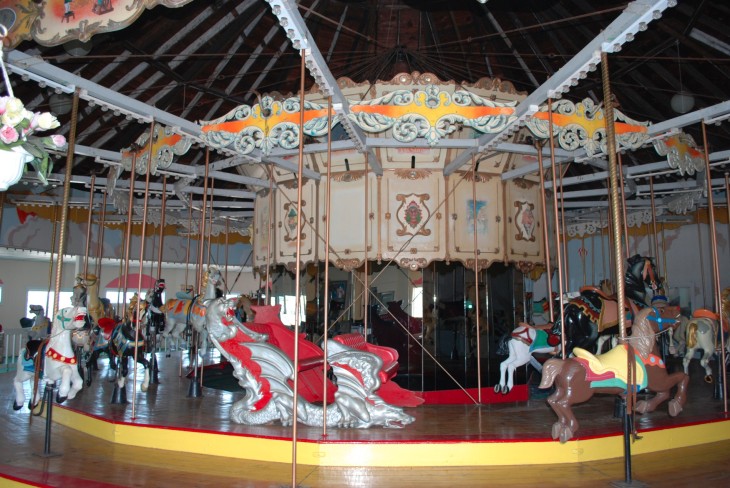 Occasionally, some Rocky Point animals turn up at auctions, like this tiger. 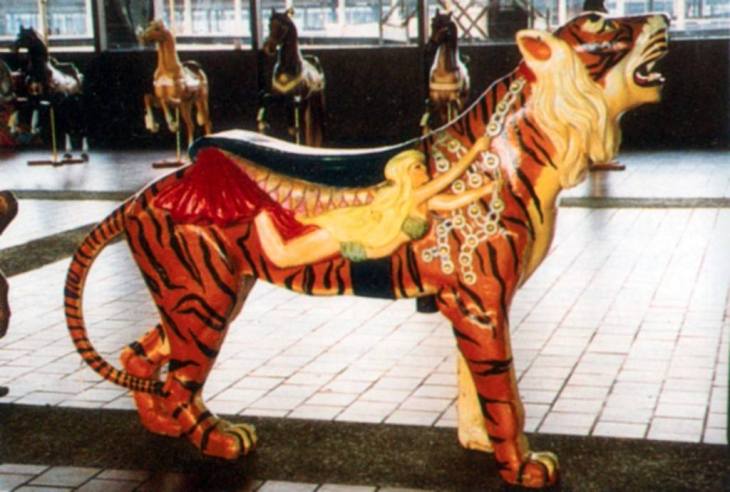 And there’s this beautiful illustration that capture’s the essence of Rocky Point’s magical machine. 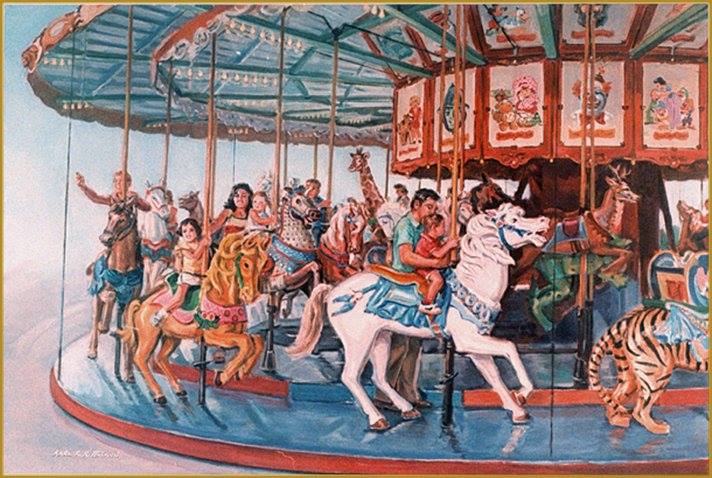 And, if an interpretive sign is needed to mark the location of the carousel at Rocky Point State Park, here’s my proposed design…although the 1915 installation date still remains sketchy! 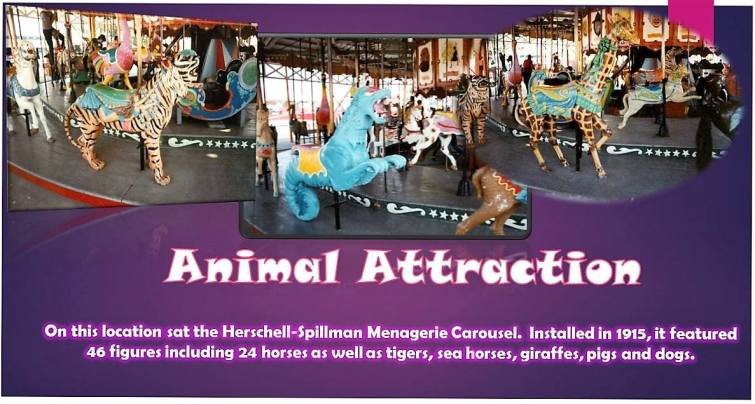 You Must Be This Tall movie collection