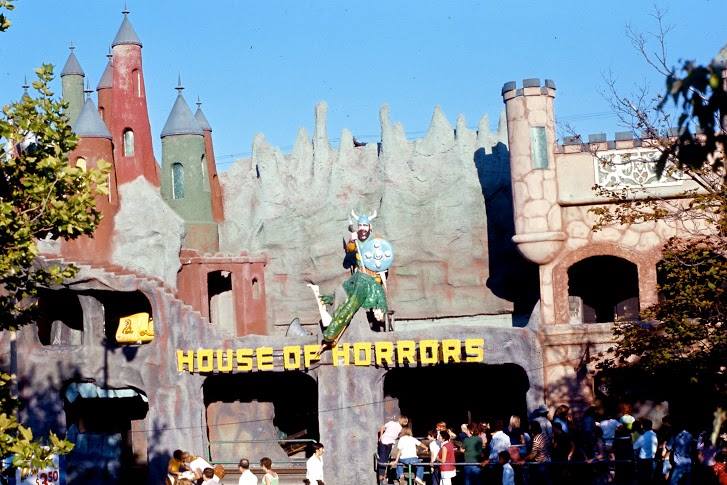 Like a conquest it would have made in Europe centuries ago, Rocky Point Park’s Viking statue has a stronghold on the imagination of the former park’s fans.  The fiberglass statue has sparked a number of urban myths.  It appeared as mysteriously as it disappeared.  So arm your fortress and gather rocks for your catapult as I try to go around the horns of the Viking saga.

The infamous Viking made its debut inside Rocky Point’s Castle of Terror when the ride opened in 1963.

While there are no known photos of the Viking when it operated inside the ride, I was fortunate enough to encounter it many times.   This over-sized warrior “guarded” the double doors at the end of a long corridor on the first floor running parallel with the rear wall of the building. After leaving the graveyard scene, riders would take a sharp left through double-doors and see the Viking sounding his battle horn about 30-feet straight ahead in their direct path. Here’s the corridor it occupied. 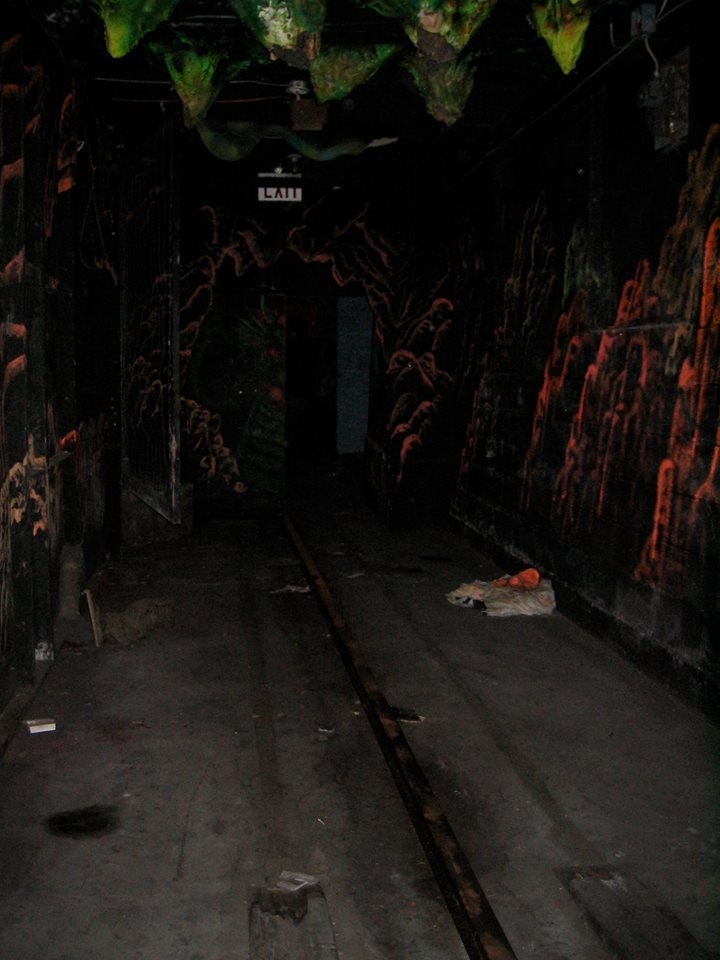 The sound hit of his blaring horn was near-deafening. Narrowly avoiding a head-on collision, the car made a slight diversion to the right, grazing the rock on which the imposing figure stood and pushing both rock and Viking to the left.

This begs the $1 million question: Who designed the Viking?  While Bill Tracy’s Outdoor Dimensional Displays company furnished all the stunts inside the ride in 1963, the Viking was never listed in the any of ODD’s catalogs. 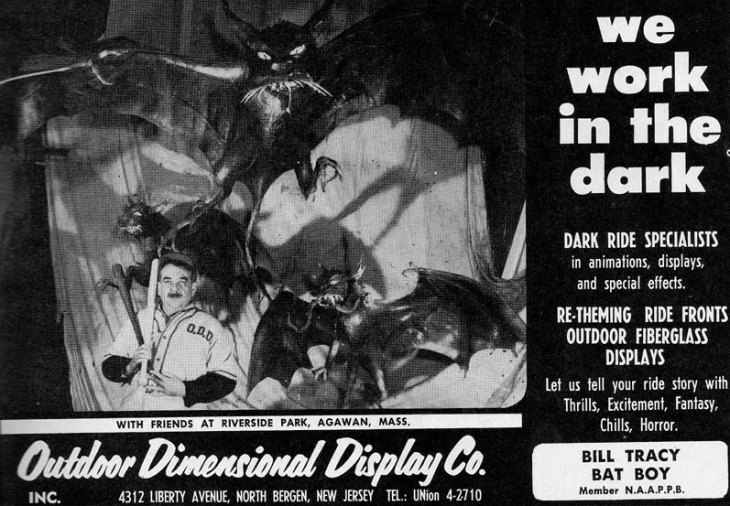 A few years ago, I spoke to one of Bill Tracy’s former ODD employees and he didn’t recall  it, although I was reminded that Tracy sometimes made customized stunts or purchased figures elsewhere when needed.  And, although Tracy designed the majority of his displays from scratch, he sometimes started with mannequins or other forms as the base.  There weren’t many super-sized figures offered by Tracy, other than the Dragon and Giant Rat stunts that artisan Herman Jones created for ODD.

It was later suggested to me that the Viking may have been obtained from International Fiberglass, a now-defunct company that made 20-foot Viking statues in the early 1960s for carpet stores.

Of course, the Rocky Point Viking wasn’t 20-feet tall, but according to Roadside
Architecture, International Fiberglass also produced smaller Viking statues, and that  there may have only been a dozen or so of these statues created.  Below are three of the statues manufactured  by that company. 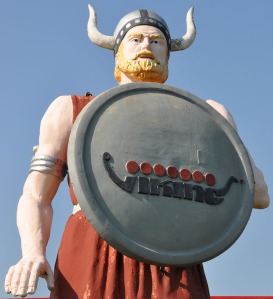 And below is the Rocky Point Viking.  Do you see any resemblance? 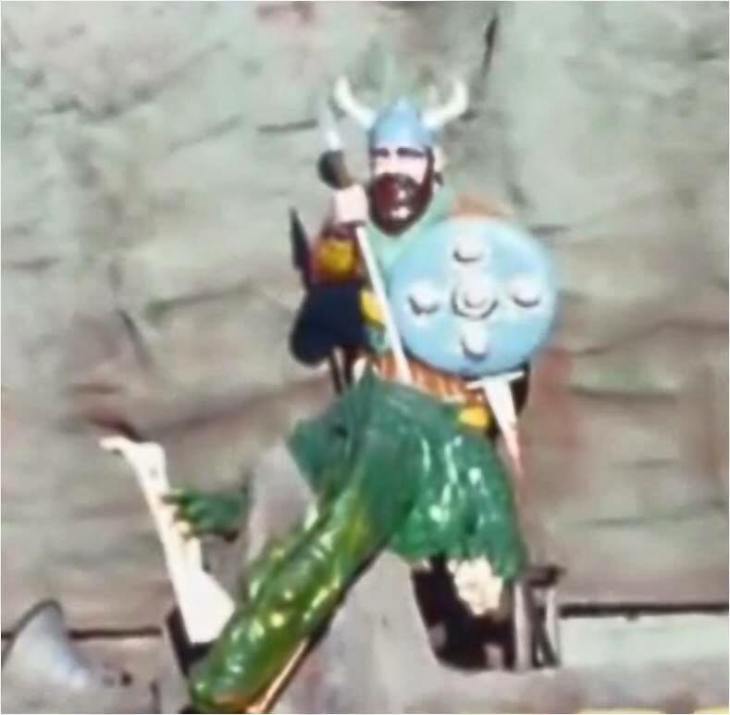 In 1970, the Viking was removed from the ride’s interior and paced on the outside balcony, his battle horn replaced with a spear. A dragon holding severed body parts, a prop from the former Laff In the Dark ride, served as his kill.  At the same time, the Castle of Terror was renamed House of Horrors. 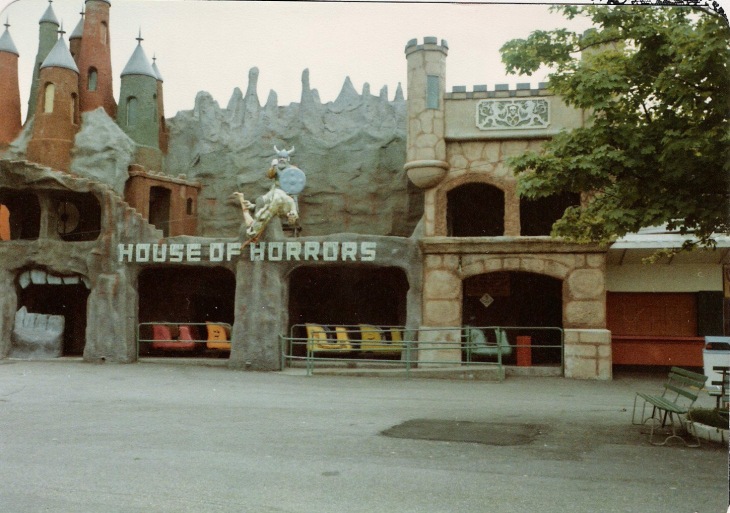 The Viking figure was removed from the façade sometime in the late 1970s or early 1980s. Here’s a 1983 photo showing the change.

While the Viking vanished, its legend lives on — even with those patrons who never saw it either inside or outside the dark ride.  In his graphic novels and DVD, “Tales of Rocky Point Park”,  author/film director Jason Mayoh explores the statue’s legacy, offers a theory on where the Viking came from, and what it did while it was at Rocky Point. 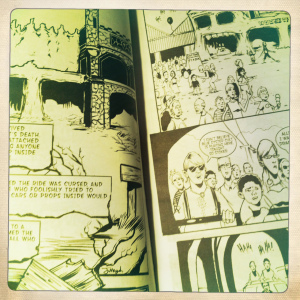 So what did you think of the Viking?  Do you recall seeing him inside the ride?  Outside?  Or both?  If you have any informational about him, please share it in the comment section below.

And if you happen to visit the former Castle of Terror/House of Horrors site at Rocky Point State Park, stay alert.  You never can tell who might be hiding behind the interpretive sign! 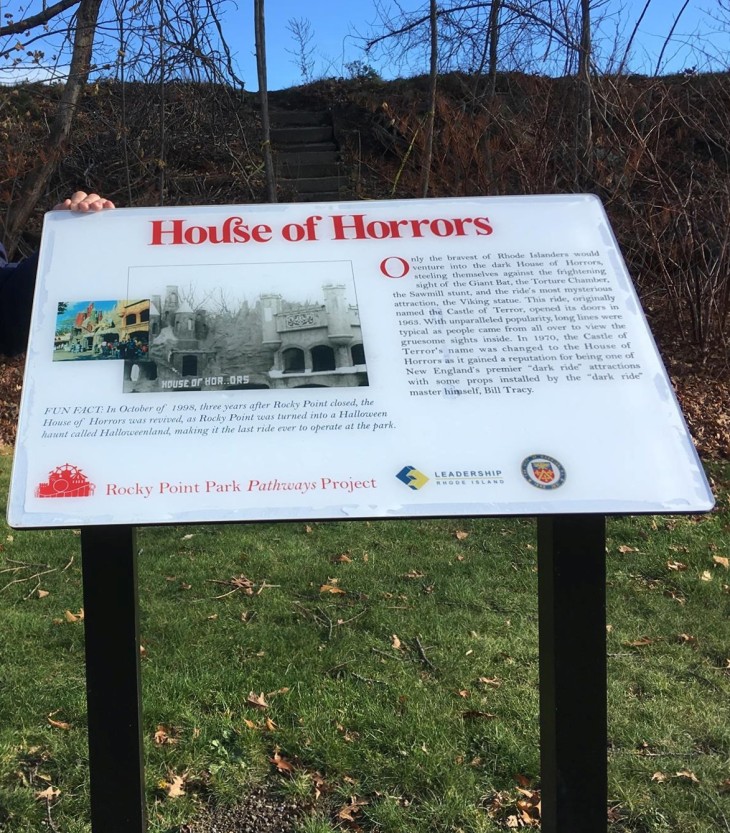 To read about the dark ride work of Bill Tracy, go here.

To read more about Rocky Point’s Castle of Terror/House of Horrors, go here.

Laff In The Dark

You Must Be This Tall movie collection