The hurricane of 1938 wiped out five of Rhode Island’s wooden roller coasters, eliminating the artistry of some of the world’s most prolific ride designers.

What do the Bullet, the Comet, the Wildcat and the Flying Turns all have in common?  All met their fate to the September 21, 1938 hurricane that crippled New England.  It is estimated that the hurricane killed 682 people, damaged or destroyed more than 57,000 homes, and caused property losses estimated at $306 million.  While some winters have been brutal to we southern New Englanders with its power outages,  school cancellations, and property damage; consider what happened decades ago one late summer day.

The 1938 storm not only destroyed all of Rhode Island’s coasters; it leveled two in nearby Massachusetts, at Fall River’s Sandy Beach Park and New Bedford’s Acushnet Park. Today’s blog post focuses on the Ocean State coaster casualties.

According to roller coaster researcher Patrick McKinney,  the Bullet was installed here in 1926 by legendary builder Harry C. Baker as seen in this 1/23/1926 Billboard magazine article. 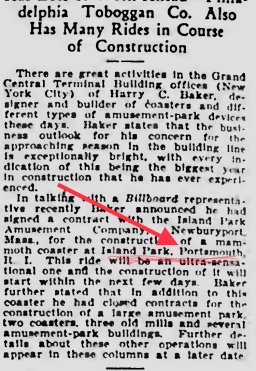 After two short years, a windstorm did heavy damage to the coaster which would receive alternations in its profile for its 1929 reopening.   The 1938 storm sealed its fate. Below are some photos courtesy of  John T. Pierce. 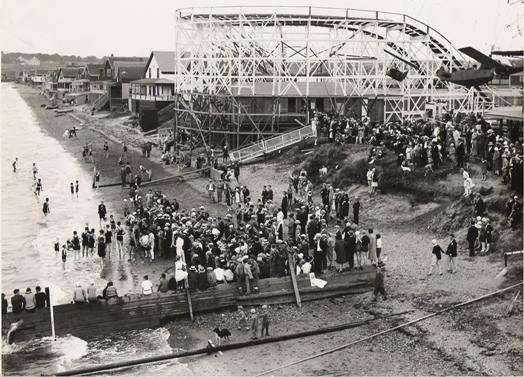 Fred Church left the prestigious ride design company of Prior & Church in 1928 to set out with his own coaster creations, and he drafted a beauty by the beach in 1931.  By all accounts it was one of his famous Bobs-style coasters, although it apparently had no name.  Regardless, it was a seaside sensation that saw its untimely demise seven years later.  Below are some images, courtesy of H.H. Harris, the Newport Historical Society, and John Carothers. 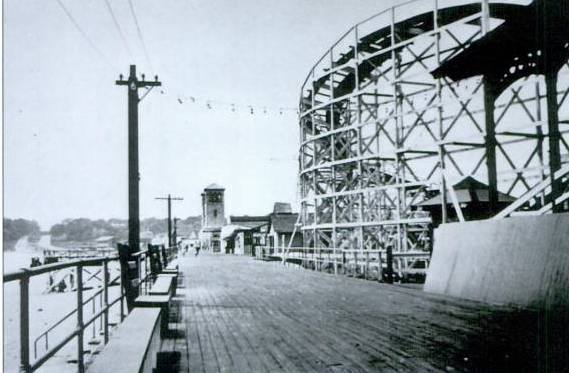 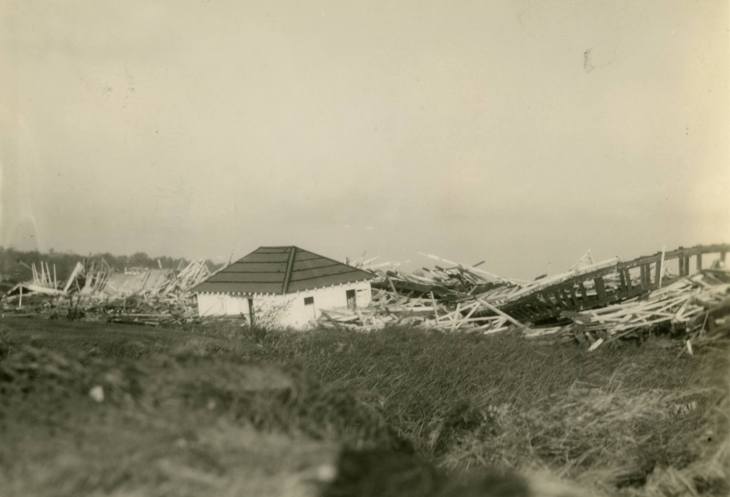 Harry C. Baker was a gifted ride builder who also managed the former Rexford Park (1906-1933) in Schenectady, New York. With his headquarters at the park, he did most of his coaster and funhouse building on the East Coast. In 1928 he was commissioned by Crescent Park to build the Comet coaster at the far end of the park near the Alhambra Ballroom.  Baker’s coaster received extensive damage by the 1938 hurricane.

In the months that followed, Crescent Park ownership hired East Providence’s Ed Leis to reconstruct it with a completely different profile, and it was renamed the Zephyr.

Now, let’s compare the Baker coaster to the Leis coaster.

Below is Baker’s 1920s Comet (otherwise known as Lightning)

And below is the Leis’  Zephyr which operated 1939 to 1961.  Note the different profiles between the two coasters. All Crescent Park photos here are courtesy of Ed Serowik. 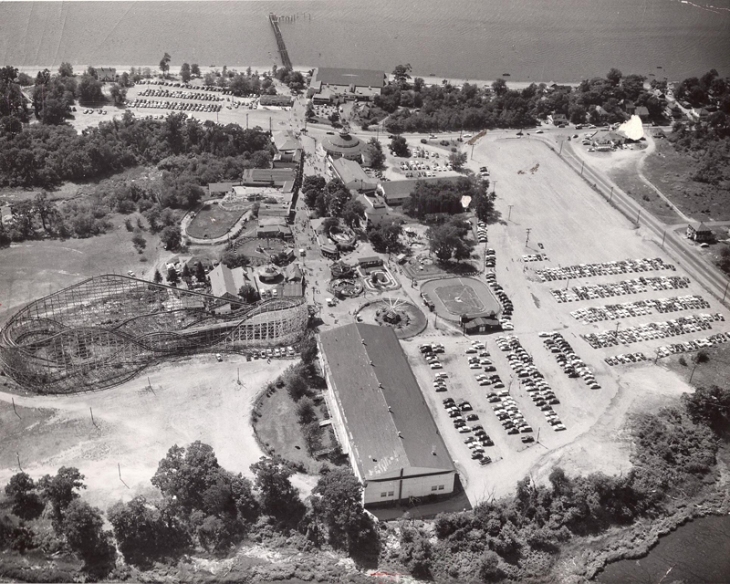 To read more about Crescent Park, go to:

Two incredible roller coasters, the Wildcat and Flying Turns, both designed by Herbert Schmeck of the Philadelphia Toboggan Company (PTC), were no match for the high winds of 1938, although it’s been reported that PTC tried to operate the Turns for a few years after the storm as a stand alone concession.  While the majority of the park’s rides were demolished, apparently the Turns was still standing and PTC, which had been operating it as a concession since its 1931 installation, tried to make it a go for the remaining years of its contract.  The park didn’t reopen in whole until 1948.

Here’s the Wildcat, installed in 1926, ascending its 77-foot lift hill. 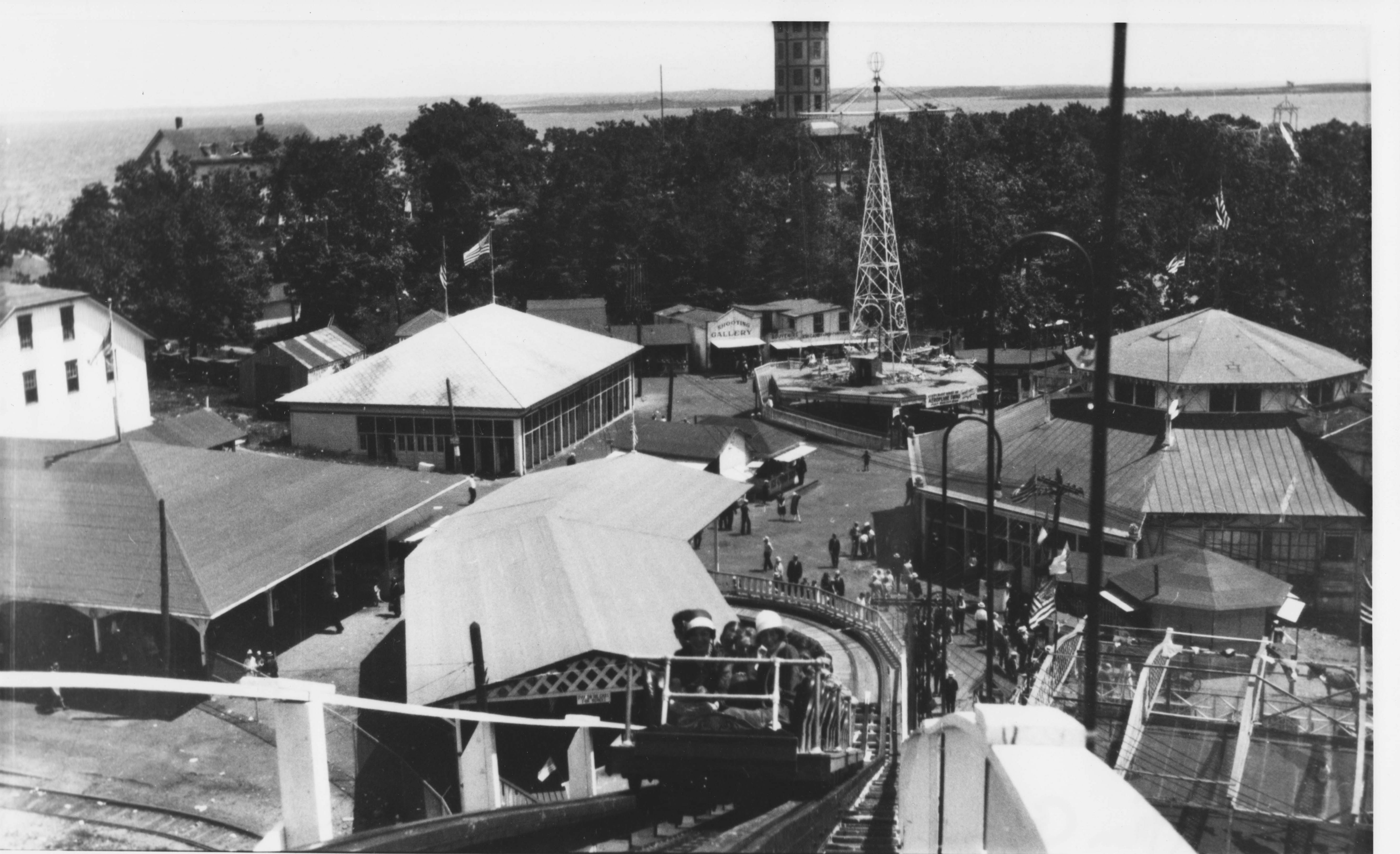 And the Flying Turns. Both photos courtesy of John Carothers.  The Flying Turns was not completely destroyed by the hurricane and since it was operating on a ten-year lease with PTC, the coaster was repaired and actually operated until the lease expired in 1941, amid the leveled park.  The coaster was close to the main park entrance, hence making it doable.

Here’s the storm devastation inflicted on the Wildcat, courtesy of talesofrockypointpark.com.

So, had there not been the 1938 hurricane, do you think these coasters…these parks…would still be operation today?  Something to think about, for sure.

To see what’s happen on the grounds of Rocky Point these days go to:

This is a text widget, which allows you to add text or HTML to your sidebar. You can use them to display text, links, images, HTML, or a combination of these. Edit them in the Widget section of the Customizer.
Loading Comments...
Comment
×
%d bloggers like this: