It loomed so high in the horizon, we youngsters swore we could see it in the distance for miles before we arrived at the park. 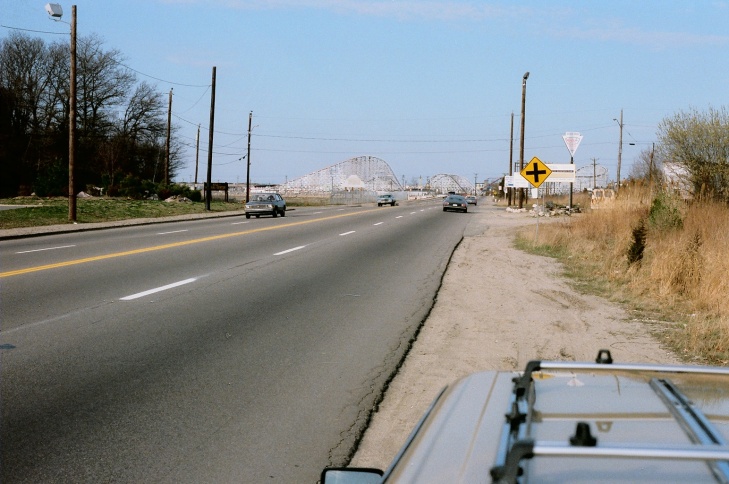 The Paragon Park Giant Coaster in Nantasket Beach, Massachusetts was a giant in every sense of the word.  Built in 1917, it survived two hurricanes, a major blizzard, a fire, and two re-profiles, running right up until Paragon Park’s last operating season of 1984.  In a century void of social media, the Giant still commanded international attention for the height of its first drop.

Paragon’s Giant Coaster was designed and constructed in 1917 by the Philadelphia Toboggan Company (PTC), now Philadelphia Toboggan Coasters, Inc.  It was part of the park’s rebuilding process after a fire the previous year.  The Giant Coaster’s serial number was #23, and its designer for PTC was 37-year-old John Miller who, seven years earlier, designed a device that prevented cars from rolling backward down the lift hill in the event of pull chain breakage. It attached to the track and clicked onto the rungs of the chain. Known as the safety chain dog, or safety ratchet, it evolved into the device on the underside of cars that makes that distinctive clinkety-clank sound of wooden coasters. As you can see in this 1917 construction photo and postcard below, Miller’s Giant Coaster design translated to a double out and back with gradual drops.  Notice that the first drop has a double-down.  Although the lift hill topped out at 98-feet, it was not the jaw-dropping straight descent that terrified many of us.

But for its time, the Giant Coaster was a thrill machine as you can see by the riders’ expressions on the double-down during the coaster’s first season.

According to the PTC archives: “Legendary Engineer Herbert P. Schmeck (who became President of PTC in 1922) was tasked to make a more thrilling ride in 1932, while using as much of the original structure as possible. The layout was christened PTC #91 and was now a single out and back with much steeper drops, especially the first drop, and a high speed helix as the finale.”

These dramatic changes are documented in the construction photo and the postcard below.

I first saw the 1932 rendition of the Giant Coaster in 1961.  I was too short to ride it, but I do recall its elaborate station near the Red Mill ride and the helix ending.  It was fun watching the trains wind down the helix on approach to the station.  I

The Giant almost got its legs taken our from under it on April 21, 1963. A fast-moving fire damaged five rides, the Giant’s train station, brake run and its helix ending.  You can see the helix on fire in the Boston Globe photo below.

And here’s another Boston Globe photo capturing the aftermath of the fire.  Notice the canals for the Red Mill ride which ran beneath the Giant Coaster.  The tunnel over those canals was wiped out by the blaze.  Look for a link to a story about the Red Mill at the end of this post.

Later in 1963, PTC’s President John Allen was asked to redesign the damaged areas of the Giant.  In doing so, the helix was not replaced and a new, streamlined station was built far to the right of the site of the original station.

The coaster was now known as PTC #130 and continued to operate at Paragon Park until Paragon’s final season of 1984.  Under the redesign, the train left the station, took a quick left and made a long brake run through the site of the original station enroute to the lift hill.  Here are frame grabs from a video shot by Lone Wolf.

When the Giant Coaster reopened in 1964, it borrowed National Amusement Devices Century Flyer trains as seen in this Boston Globe photo. Those trains came from Crescent Park (East Providence, RI) where they ran on the park’s Zephyr coaster that closed after the 1961 season. 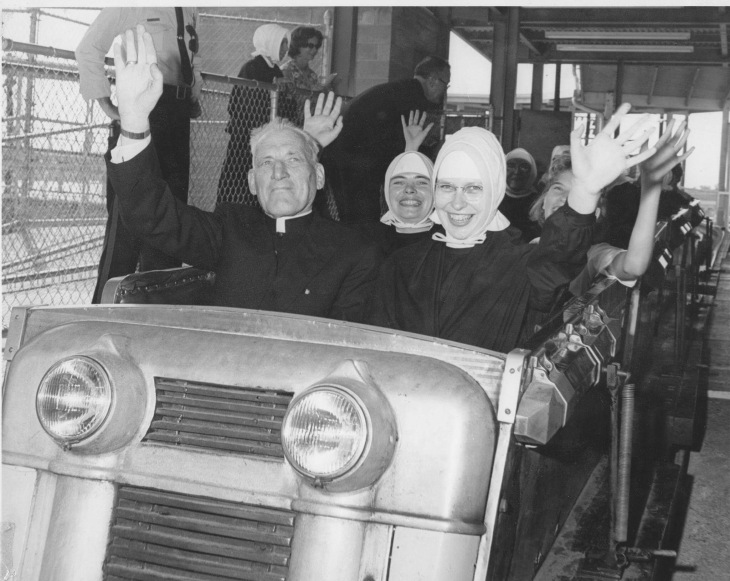 In the meantime,  PTC trains from the former Forest Park Highlands Comet coaster were being prepped from the Giant.  In a cruel, ironic twist of fate, this St. Louis park was severely damaged by fire in July 1963, leading to its permanent closure. 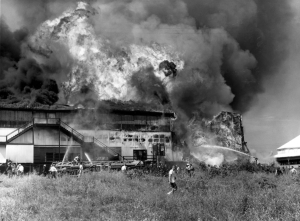 The Highlands Comet coaster was a 1941 PTC design by Schmeck, who had designed Paragon’s Giant Coaster nine years earlier.  Fortunately, the Comet’s trains weren’t destroyed by the fire, and once prepped, proved to be a perfect fit for the Paragon Giant’s tracks as seen below.

Yet, there was one Giant problem!  The coaster now had an identify crisis!  The trains said “Comet” but the station said “Giant Coaster”!

This led to park patrons choosing one of two different names – whichever one they liked best!

As far as I was concerned, it was the Giant Coaster and I first rode it in August 1967.  Here’s a frame grab from 8mm film footage I shot back then.

To find out more about Paragon’s Red Mill ride and those that followed, go to: