Like a jumper on the outer row, it hopped up and down the East Coast.  Here’s a brief look at the journey of the former carousel at Goddard Memorial State Park in East Greenwich, Rhode Island.

Have you ever attended a function inside, or merely strolled outside, the beautifully restored Goddard Memorial State Park Carousel Performing Arts Bui 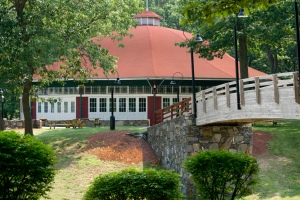 lding?  If so, were you aware of the well-traveled jewel of a carousel that it once hosted?  Here’s the breakdown.

A three-row Charles I.D. Looff carousel, it made its debut at Lakeside Park in Owasco, New York and operated there until 1907.  As you see in this 1903 photo below from Lakeside Park, the ride’s rounding boards had presidential portraits.

After being dismantled at Lakeside Park, it was moved southward to Rocky Point Park in Warwick, RI where it was operated as a concession by Joseph Carrolo who oversaw its remodeling from a stationary to a jumping model in 1908.  It was installed in a pavilion near the end of the pier making it a frequent first stop for those arriving from the park by boat.  Amazingly, Carrolo’s Looff carousel installation in 1908 replaced another Looff carousel installed at Rocky Point in 1891.

Carrolo, known as “Rhode Island’s Carousel King,” was an immigrant from Naples, Italy, who began working at Crescent Park at the age of thirteen, sweeping up, picking up the brass rings, and collecting tickets. He eventually owned several carousels in Rhode Island, including one at Oakland Beach and at Lake Nipmuc in Mendon, Massachusetts.

Rocky Point eventually renamed Carollo’s ride, the Waterfront Merry-Go-Round as not to confuse it with the midway carousel, a 1915 Herschell-Spillman model.  I’ve circled Carollo’s ride in pink in the photo below. 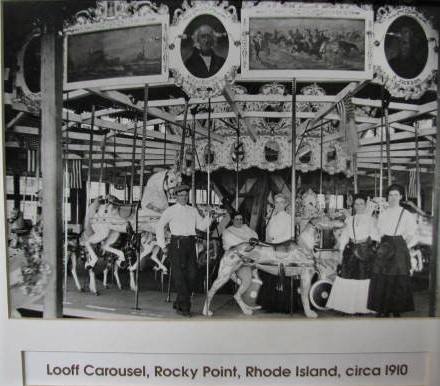 Goddard Memorial State Park, which opened in the late 1920s, became the next home for Carrolo’s carousel.  He removed it from Rocky Point following the 1930 season.  Rocky Point replaced the carousel void with the Custer Car Ride, circled in blue below.

Relocated to Goddard for the 1931 summer season, the carousel was an instant hit at the new state park.

Here are some color images of it at Goddard – frames from a 1957 16mm home movie.  The carousel featured a ring game – catch the brass ring and get a free ride.

As a youngster and a teen, I rode the Goddard carousel many times.  My favorite animal to ride, although stationary, was the greyhound, seen here.

What stands out in my mind the most was a 1972 visit when I noticed the addition of several coin-operated games.  They seemed so out of place occupying the same space as an elegant carousel.  The abrupt sounds from the electronic shooting gallery clashed harshly with the sweet old-time melodies being played off a sheet paper roll on the vintage band organ.

As mentioned, the Goddard carousel was graced with presidential portraits, plus renderings of historical events and sites. 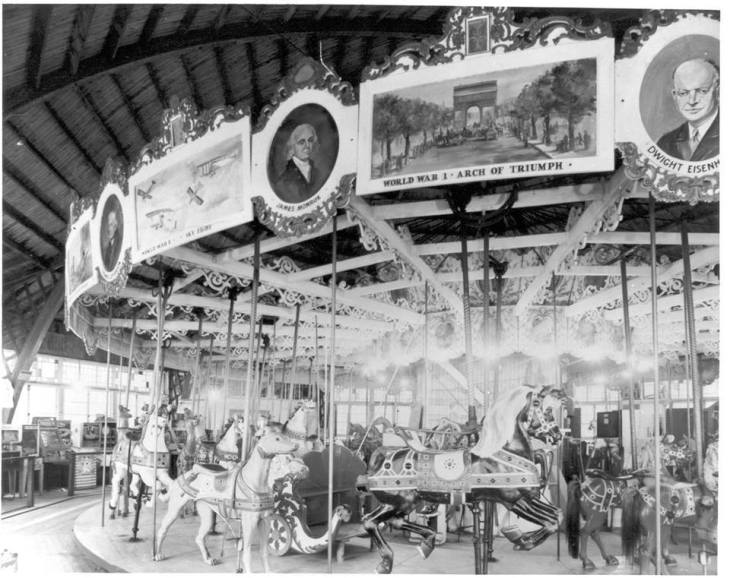 Although I felt something amiss at the carousel at age 17 in 1972, I had no idea this was the second to the last year for the attraction. Carrolo closed his Goddard Park concession after the 1973 operating season.  By some accounts, the ride was dismantled and intended for a California destination, but it ended up in Jacksonville, Florida.  What we do know is that some of the animals are now in hands of private collectors, such as my favorite, the greyhound, seen below in the collection of Charlotte Dinger at the National Merry Go Round Museum in Sandusky, Ohio.

Others, like this horse, claimed to be from Goddard, are scattered about.

The current whereabouts of the rest of the carousel are unknown, but those with info and/or memories of the Goddard carousel, please share them in the comment section below.

The empty carousel pavilion has since been refurbished by the park as the Goddard Memorial State Park Carousel Performing Arts Building and is available for events and private parties.

So there you have it, the history of the Goddard carousel in a roundabout way, pardon the pun!  Below is a piece I designed that recaps the carousel’s odyssey,  but again, please share any information you have on this former iconic attraction in the comments below.

To see video of the Goddard Carousel in operation in 1957, go here:

4 thoughts on “The carousel that horsed around!”